WASHINGTON (AP) — President Barack Obama sent Congress a $3.9 trillion budget Tuesday that would funnel money into road building, education and other economy-bolstering programs, handing Democrats a playbook for their election-year themes of creating jobs and narrowing the income gap between rich and poor.

The blueprint for fiscal 2015, which begins Oct. 1, is laden with populist proposals designed to fortify those goals. It includes new spending for pre-school education and job training, expanded tax credits for 13.5 million low-income workers without children and more than $1 trillion in higher taxes over the next decade, mostly for the wealthiest Americans.

“As a country, we’ve got to make a decision if we’re going to protect tax breaks for the wealthiest Americans or if we’re going to make smart investments necessary to create jobs and grow our economy and expand opportunity for every American,” Obama told students at an elementary school in the nation’s capital.

With an eye in part on job creation, money would be spent to upgrade highways and railroads, Veterans Affairs hospitals and national parks. Additional funds would be aimed at clean energy research, creating 45 public-private manufacturing institutes for spurring innovation and training workers whose companies have closed or moved.

To help pay for those initiatives and others and trim federal deficits as well, Obama relies in part on higher revenue.

He would raise $651 billion by limiting tax deductions for the nation’s highest earners and with a “Buffett tax” — named for billionaire Warren Buffett — slapping minimum levies on the highest-earning people. Taxes would also be raised on large estates, financial institutions, tobacco products, airline passengers and managers of private investment funds.

Congress has ignored those revenue proposals and many of Obama’s spending ideas before. With the entire House and one-third of the Senate facing re-election in November, campaign-year pressures and gridlock between the Democratic-led Senate and Republican dominated House all but ensure that few of the president’s initiatives will go far. 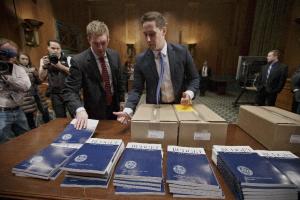 “The president has offered perhaps his most irresponsible budget yet,” said House Speaker John Boehner, R-Ohio, who has participated in two failed rounds of deficit-reduction talks with Obama since 2011. “American families looking for jobs and opportunity will find only more government in this plan.”

“The president’s budget is yet another disappointment because it reinforces the status quo,” said House Budget Committee Chairman Paul Ryan, R-Wis. “It would demand that families pay more so Washington can spend more.”

The Republican recipe for accelerating economic growth includes cutting taxes or overhauling the entire tax code, and they criticize higher spending as wasteful.

Obama’s budget claims to obey overall agency spending limits that were enacted in December after a bipartisan compromise was reached between Ryan and Sen. Patty Murray, D-Wash., the heads of the House and Senate budget committees.

Yet Obama was proposing an additional package of $55 billion in spending priorities, half for defense and half for domestic programs.

Without that extra money, Pentagon spending be $496 billion, the same as this year. The Pentagon plans to shrink the Army from 490,000 active-duty soldiers to as few as 440,000 over the coming five years — the smallest since just before World War II. 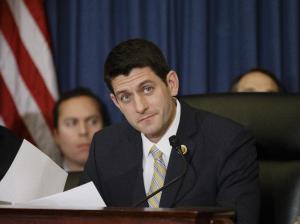 The extra funds would allow steps like buying additional aircraft and enhancing training.

On the domestic side, Obama would use the additional money for grants to states for preschools, new research financed by the National Institutes of Health and modernization of aviation safety systems.

That extra spending would be paid for by cutting federal crop insurance, raising airline passenger fees and capping retirement account tax benefits for wealthy savers — all of which would face an uphill climb in Congress.

The White House released fewer budget documents than normal on Tuesday, making it hard to determine exact costs and details of some of those additional spending proposals and others, such as the 2015 price tag for Obama’s health care overhaul.

However, Obama’s plan to expand the earned income tax credit to childless, low-income workers would cost $116 billion over 10 years. It would increase the current $500 maximum those recipients can receive to $1,000.

The budget projects a 2015 deficit of $564 billion and a shortfall this year of $649 billion. If those come true, it would mark three straight years of annual red ink under $1 trillion, following four previous years when deficits exceeded that mark every time. 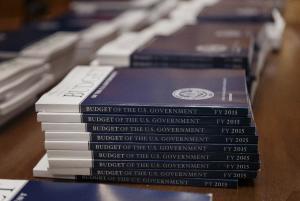 The president’s spending plan also takes credit for reducing accumulated deficits over coming decade by $2.2 trillion. But nearly one-third of that comes from claimed savings from the end of the U.S. war in Iraq and the gradual withdrawal of forces from Afghanistan.

Critics argue that those savings are fictional because with the ending of U.S. involvement in those conflicts, no one had been expecting that money to be spent on combat.

Other savings the president claims include $158 billion from his proposal to revamp immigration laws, which has stalled in Congress. The nonpartisan Congressional Budget Office has made a similar estimate, with federal revenue accruing as more immigrants work and pay taxes.

The budget also retains Obama’s 2012 proposal to reshape corporate income taxes, including lowering the top rate from 28 percent to 25 percent. It says the overhaul would raise a one-time $150 billion with steps like smaller loopholes for U.S. companies doing business overseas — about half of which Obama would use to finance transportation improvements.

That resembles a proposal by House Ways and Means Committee Chairman Dave Camp, R-Mich., in a rare instance of overlap on revenues by the two parties. But prospects for a tax overhaul remain dim in an election year.

Much of the rest of Obama’s deficit reduction would come from other proposals with little chance of surviving in Congress, including higher taxes and Medicare costs for the rich and cuts in government payments to pharmaceutical companies and other Medicare providers. With declining budget deficits, it has become easier for lawmakers to avoid seriously considering the politically painful tax increases and spending cuts needed to significantly reduce the shortfalls.

Thus, the president’s budget does not renew last year’s offer — hated by many fellow Democrats — to save money by slowing increases of Social Security benefits. The White House says that plan was advanced only to entice congressional Republicans into deficit-reduction talks and was excluded this year after GOP leaders refused to reciprocate by offering tax increases.

Obama’s budget starts what should be a relatively peaceful year on Washington’s fiscal front lines. That is because land mines embedded in the budgetary landscape have been defused this time around after cliffhanger, partisan showdowns in recent years.

Instead of the annual fight over spending limits — which last year helped produce a 16-day partial government shutdown — Murray and Ryan’s bipartisan compromise set an overall agency spending cap for the next two years. That has eliminated the need for lawmakers to do anything but provide the details in later spending bills, easing the threat of another federal closure.

Also missing this year is a need to extend the government’s debt limit, which in the past has sparked battles that threatened economy-jarring federal defaults. Congress has given the Treasury Department authority to borrow money into next March, eliminating a must-pass legislative vehicle that either side might use to make demands.