DETROIT (AP) — Detroit Police Chief James Craig stood at attention in the pulpit and snapped his right hand to his forehead, offering a crisp salute in the direction of the casket below him.

“Chief Jayvon: Rest in peace,” Craig said, before walking to his seat amid thunderous applause from those who gathered Monday to say a final goodbye to Jayvon Felton, who died last week after a 10-month battle with leukemia.

Jayvon, who always had wanted to be a Detroit police officer, got his wish in January when Craig pulled out all the stops, flying the 9-year-old by helicopter to police headquarters, where he was greeted by classmates from Roberto Clemente Academy, police dogs and mascots — including the Detroit Tigers’ Paws.

Jayvon was given a uniform embroidered with his name and a badge and smiled when Craig administered the oath of office, making him “Chief for a Day.”

The body of the fourth-grader, who would have turned 10 this past Saturday, lay inside a casket with his badge pinned on his shirt during a pre-funeral family hour Monday at Hartford Memorial Baptist Church in Detroit.

The Rev. Charles G. Adams, who delivered the eulogy, said this chief was on his way to meet another high-ranking official. 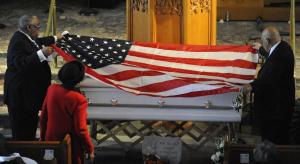 “He wore the gracious confidence of his chief. And he’s gone now to the eternal chief beyond all time and place. And he will be at the gates smiling when we land on the banks of paradise,” Adams told mourners, half of whom were law enforcement personnel.

Craig said it was important to him that Jayvon be afforded the same funeral as any officer killed in the line of duty.

“We felt it was fitting because of what he represents,” Craig said outside the church after a long line of officers solemnly saluted as Jayvon’s flag-draped casket was brought outside to a waiting hearse.

“It’s an honor to be able to celebrate this young man’s life — someone we in the Detroit Police Department regard as a hero,” Craig said.

In the funeral program, Jayvon’s list of survivors included not only his family, but also Craig and “the entire Detroit Police Department.” The photo on the cover was of a smiling Jayvon wearing his police uniform. It read: “Chief Jayvon Lee Felton, March 1, 2004-February 24, 2014.

“Thanks be to God for a short life that was a great life,” Adams said.