LONDON (Reuters) – Emergency services said nearly 90 people had been injured in a packed London theater on Thursday when part of the ceiling collapsed during a performance, bringing the city’s West End theater district to a standstill.

The audience was showered with masonry and debris following the incident at the Apollo Theater, where about 720 people including many families were watching the hugely popular play “The Curious Incident of the Dog in the Night-Time”.

“A section of the theater’s ceiling collapsed onto the audience who were watching the show. The ceiling took parts of the balconies down with it,” said Nick Harding from London Fire Brigade.

Emergency services said there were 88 injured, with 81 “walking wounded”, many with head injuries, with seven more taken to hospital with more serious injuries. Police said they were not aware of any fatalities.

“Specialist urban search and rescue crews were also called to the scene to make sure no one was trapped. Fortunately all those who were trapped have been rescued and treated for injuries or taken to hospital,” Harding said. 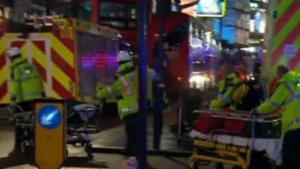 Witnesses said the ceiling in the four-storey auditorium had simply collapsed during the performance, sending those inside into a panic when they realized it was not part of the play.

“We saw the ceiling give way and it just dropped down onto the stalls. There was dust everywhere and people were screaming,” Steve George, 29, who was sitting in seats at the top of the theater, told Reuters.

“I have no idea how many people would have been injured,” added George, a cinema manager who had taken his wife Hannah to the show for a birthday treat.

“It became like a black mist with people walking over me, added Michelle Chew, another member of the audience.

Emergency vehicles blocked off Shaftesbury Avenue in the heart of “London’s theaterland, packed with revelers on one of the busiest nights of the year in the run-up to Christmas.

“Collapse: a rescue mission is underway at the Apollo theatre.”

“People were running in here with dust all over themselves,” said Thomas Asihen, manager of the McDonald’s restaurant located on the same block.

He said people were being brought out by paramedics shrouded in plastic blankets, with some carried out on stretchers.

Those injured inside the Apollo, which first opened its doors in February 1901, were taken to the nearby Gielgud Theatre while a bus was being used to transport those needing hospital treatment.

Police said the cause of the collapse was unclear, but there was no suggestion that it was the result of any deliberate act or attack.

“In my time as a fire officer I’ve never seen an incident like this. I imagine lots of people were out enjoying the show in the run-up to Christmas,” Harding said.