By GARANCE BURKE and LISA LEFF

SAN FRANCISCO (AP) — A transgender teenager was beaten and sexually assaulted by three boys in a bathroom at a suburban San Francisco public school, police said, marking the second time a transgender student reported being the target of violence at the campus.

The 15-year-old student, who is biologically female but identifies as male, told officers he was leaving a boy’s bathroom late Monday morning at Hercules Middle/High School when the assailants pushed him inside a large stall and attacked him, Hercules police Detective Connie Van Putten said.

Van Putten said the boys reportedly made disparaging remarks to the student, allowing police to treat the case as a hate crime. The victim said he didn’t know the boys.

“He walked himself to the health center, and was obviously very upset when he talked to officers,” Van Putten said. “He is doing as well as can be expected under the circumstances.”

It was the first assault of a transgender student made public since a new California law went into effect on Jan. 1 guaranteeing students the right to use the bathrooms and locker rooms that match the gender with which they identify.

But even before the law took effect, the West Contra Costa Unified School District, which includes Hercules Middle/High, gave transgender students their choice of which school facilities to use, district spokesman Marin Trujillo said. 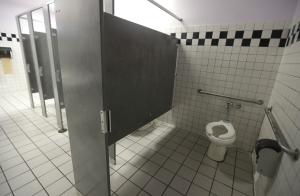 The bathroom where the attack occurred is between a custodial office and a classroom. Trujillo would not say how long the student victim had been using the boys’ restrooms at school but stressed that it would have been permitted even if the law had not been passed.

“We have transgender students at our elementary, middle and high schools and have been making these types of accommodations for many years already,” he said.

Opponents of the new law recently tried to repeal it at the ballot box but failed to gather enough signatures to qualify a referendum for the November election. School officials suspect the campaign may have indirectly played a role in Monday’s attack by fueling fears among parents and students, Trujillo said.

“We believe as a district, and the superintendent does, that the latest efforts by the petitioners to bring down the law has stirred up a lot of hate and it is showing up in the wrong places,” he said.

The teen was taken to a hospital for treatment and released to his parents, No suspects or witnesses have been identified, and detectives on Tuesday collected physical evidence and interviewed students at the campus of 1,800 students in grades 6-12 about 20 miles northeast of San Francisco. 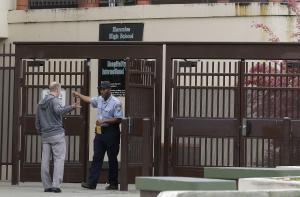 Citing privacy rules and the ongoing investigation, neither police nor school officials would provide details about what happened in the bathroom or the nature of the student’s injuries.

Last fall, another transgender student went public with an account of what life was like for her at Hercules High after she got into a fight with three other girls that was caught on a cellphone video that went viral. The transgender teenager, Jewlyes Gutierrez, a biological male who identifies as a female, said she had repeatedly complained about being harassed at school before the brawl.

No one was seriously injured in the fight, but Gutierrez, 16, was charged with misdemeanor battery. Civil rights groups and the president of the school board have called on prosecutors to drop the charge after questioning why she was the only one to face a possible criminal penalty.

Carolyn Laub, executive director of the Gay-Straight Alliance Network, which supports and trains student organizations that serve gay, lesbian, bisexual and transgender students, said Monday’s attack indicates that Hercules High has serious safety problems that have nothing to do with the new law.

“This is a horrible incident with a young person who has been sexually assaulted. It’s not about bathrooms,” Laub said. “It’s an attack and it happened at a school where violence has been rampant and allowed to escalate to where something like this has been allowed to occur.”

Trujillo said it was wrong to put Gutierrez’ experience and Monday’s assault in the same category and denied that the school has unusual behavior problems.

In a national survey of more than 8,500 young people between ages 13 and 20, the Gay, Lesbian and Straight Education Network found that more than 75 percent of those who self-identified as transgender reported being verbally harassed at school because of their gender identity.

More than 32 percent of the transgender respondents said they had been physically assaulted at school, according to the 2011 survey by the New York-based organization that advocates for policies to improve the school experiences of gay and transgender youth.