State lawmakers have convened for only four days of business since the start of the COVID-19 pandemic. Some of them want to work remotely. 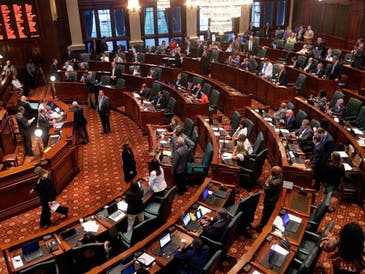 Lawmakers meet at the State Capitol in Springfield in a file photo. The Illinois General Assembly has not convened since a brief session in May. (AP Photo/Seth Perlman, File)

SPRINGFIELD, IL — Only three new state laws take effect in Illinois on Jan. 1, 2021. That compares to more than 250 new pieces of legislation that took effect at the start of 2020 — an unprecedented year in Illinois state politics.

The three new laws establish a price cap for insulin for those with state-regulated health care plans, offer additional confidentiality protections to stalking and sexual assault victims and make it easier to collect DNA from family members of missing or unidentified dead people.

“Virtual Lawmaking”
The Illinois General Assembly halted business in March after Gov. J.B. Pritzker issued a statewide disaster declaration in response to the spread of COVID-19. It has convened only once since — a four-day emergency session in Springfield in late May.

That produced a budget, several emergency measures like one-time election adjustments set to automatically expire, and an opportunity for local governments to conduct public business and meet remotely under the Open Meetings Act.

But an effort to allow state legislators to vote remotely failed by one vote in the Illinois House, which has not convened since May 24.

On Monday, two Chicago Democrats filed a bill to allow “virtual lawmaking” in case of a joint proclamation by the House speaker and Senate president. Rep. Ann Williams and Sen. Rob Martwick said the state is facing problems that require action by the state’s elected representatives.

“The intent of the legislation is to provide for the very rare circumstances where it is extremely dangerous or impossible to meet.” Williams said, announcing the bill. “It’s clear that the Legislature operates most effectively in person, when we can all meet and interact with each other more easily.”

RELATED: 25 New Illinois Laws in 2020 That Could Impact Your Life

On May 30, 2019, lawmakers in both houses unanimously passed bills amending the Missing Persons Identification Act and the Address Confidentiality for Victims of Domestic Violence Act, while allows people to apply to the attorney general’s office for their home, school or work addresses to be kept confidential and to use a substitute mailing address.

House Bill 2818 changes the name of the law to the Address Confidentiality for Victims of Domestic Violence, Sexual Assault, or Stalking Act, defines the terms sexual assault and stalking, and makes corresponding changes to the Election Code.

House Bill 2708, which adds to missing person procedures, allows family members of missing people to voluntarily submit DNA samples and police to collect samples when people go missing. Local law enforcement agencies must also now submit information to the National Missing and Unidentified Persons System, or NamUs, and can submit DNA samples to an outside partner lab for indexing instead of having to immediately forward them to the state police. The effective date of the law was pushed back by 12 months by an amendment of the Senate Local Government Committee.

About 600,000 are reported missing every year in the U.S., with most found alive relatively quickly. But tens of thousands of missing persons cases remain open for over a year as the investigations go cold. An estimated 4,400 unidentified bodies are recovered every year, and about 1,000 of those remain unidentified for more than a year after they are found, according to NamUs.

The only one of the three to provoke any opposition was Senate Bill 667, which caps out-of-pocket costs for people with state-regulated health insurance plans at $100 per 30 day supply. The bill passed the Senate 43-1 and won House approval by a vote of 100-13 with one state rep voting present.

While there are an estimated 1.3 million diabetic Illinois adults, it is not clear how many will be affected by the cap, since it does not impact federally regulated health insurance like self-insurance plans, Medicare and Medicaid.

A fourth bill passed with a Jan. 1, 2021, effective date — Senate Bill 687 — would have created new income tax brackets had a constitutional amendment to allow it not been rejected by voters in last month’s election.

Over the following weeks, Gov. J.B. Pritzker’s administration announced a projected fiscal 2021 budget gap of nearly $4 billion, with deficits through 2026, before borrowing an additional $2 billion from the Federal Reserve’s emergency lending program.

With about $140 billion in pension debt, $7 billion in unpaid bills and the highest borrowing costs of any state tracked by Bloomberg, Illinois is the only state to have taken advantage of the Fed’s Municipal Liquidity Facility, which is set to expire Dec. 31.