Trump, Biden battle over the virus, climate, and race in less chaotic debate; Analysis: Debate is a brief interlude of normalcy in 2020 race 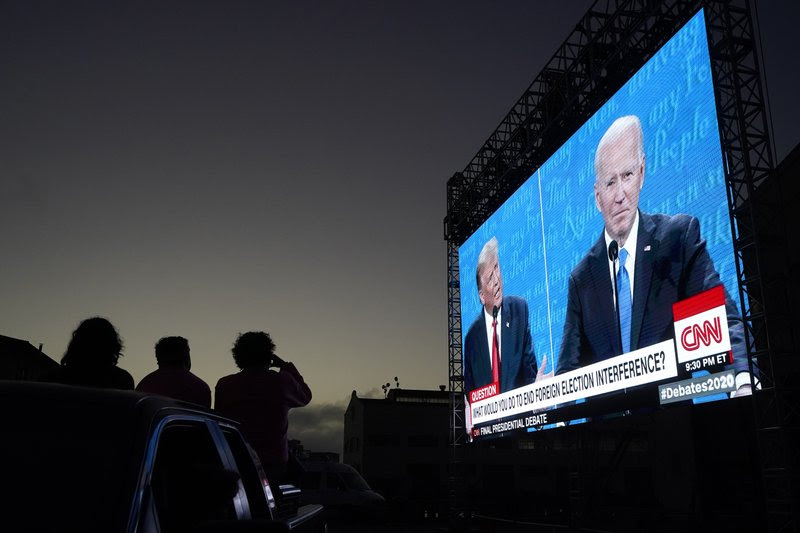 A bonafide U.S. presidential debate broke out in Nashville last night as President Donald Trump and Democratic challenger Joe Biden battled over how to tame the raging coronavirus in the 2020 election’s final face-off.

Trump declared that the virus, which killed more than 1,000 Americans on Thursday alone, and more than 223,000 so far, will “go away.”

Biden countered that the nation was heading toward “a dark winter.” “Anyone who is responsible for that many deaths should not remain as president of the United States of America,” Biden said.

They largely shelved the rancor that overshadowed their previous debate in favor of a more substantive exchange that highlighted their vastly different approaches to solving the major domestic and foreign policy challenges engulfing the nation, report Jonathan Lemire, Michelle L. Price, Darlene Superville, and Will Weissert.

With less than two weeks until the election, Trump sought to portray himself as the same outsider he first pitched to voters four years ago, arguing anew that he wasn’t a politician.

Biden, meanwhile, argued that Trump was an incompetent leader of a country facing multiple crises, including the pandemic, widespread job losses and racial injustice, and tried to connect what he saw as the president’s failures to the everyday lives of Americans.

Analysis: It was a brief interlude of normalcy in an otherwise highly abnormal year, and a reprieve for voters turned off by their noxious first faceoff, AP Washington Bureau Chief, Julie Pace writes. The candidates spent 90 minutes tussling over their approach to the pandemic, the future of the nation’s health insurance system and who is best positioned to de-escalate nuclear tensions with North Korea. There were heated clashes, but far fewer interruptions and crosstalk than in the opening debate. The debate commission mandated a mute button for the candidates’ opening answers to each topic, helping the moderator enforce some decorum.

Biden Oil: The Democrat’s remarks that he will transition away from the oil industry in favor of renewable energy sources drew quick attention from Trump, who called it a “big statement” and suggested it would come with political blowback in oil-producing U.S. states. Biden has called for a move to net-zero greenhouse gas emissions by 2050 and has pledged to end federal subsidies for the oil and gas industry while Trump touts his support for the industry and its jobs, Kathleen Ronayne and Ellen Knickmeyer report.

China’s Hopes: Beijing hopes Washington will tone down conflicts over trade, technology and security if Biden wins the election. But any shift is likely to be limited as frustration with Beijing grows across the American political spectrum. Trump’s Republicans and Biden’s Democrats agree on criticism of China’s trade record and stance toward Hong Kong, Taiwan and religious and ethnic minorities in Tibet and Xinjiang, where the ruling Communist Party has detained Muslims in political re-education camps. Joe McDonald reports from Beijing.

In the meantime, Chinese leader Xi Jinping has condemned what he called unilateralism, protectionism and extreme egoism in a jab at the U.S. made during a rally to mark the 70th anniversary of China’s entry into the 1950-53 Korean War.

Election Security: Russian hackers have targeted the networks of dozens of state and local governments in the U.S. in recent days, and have stolen data from at least two servers. The alert describes an onslaught of recent activity from Russian state-sponsored hacking groups against state and local networks, some of which were successfully compromised. The advisory from the FBI and the Department of Homeland Security’s cybersecurity agency functions as a reminder of Russia’s potent capabilities even as U.S. officials warn about Iranian interference. Eric Tucker reports.