WASHINGTON (AP) — Citing strong progress on the economy, President Barack Obama said at his annual year-end newsconference Friday that 2014 “can be a breakthrough year for America” after a long season of recession and slow recovery.

Yet he suggested that given widespread criticism, he may alter the power of the National Security Agency to collect information on Americans.

And when it came to the universally panned roll out of his health care law, Obama conceded that “we screwed it up,” and said, “I’m going to be making appropriate adjustments once we get through this year.” It was unclear if he meant to signal high-level personnel changes.

The president praised Congress for a recent, relatively modest budget compromise. “It’s probably too early to declare an outbreak of bipartisanship. But it’s also fair to say we’re not condemned to endless gridlock,” he said.

He also renewed his long-standing refusal to negotiate concessions with Republicans in exchange for legislation that will be needed in late winter or early spring to raise the nation’s debt limit. “It is not something that is a negotiating tool. It’s not leverage. It’s a responsibility of Congress,” he said, although he added that he was willing to discuss other issues separately.

Obama spoke from the White House briefing room podium as he concluded his fifth year as president, his hair far grayer than the day he was first sworn in. He and his family were departing later in the day for their holiday vacation in Hawaii.

The president opened his remarks with an upbeat assessment of the state of the economy, and seemed determined not to stray from it.

Asked if this year had been the worst of his presidency so far, he laughed and said, “That’s not how I think about it.”

Obama’s polls are at or near the low point of his tenure in the White House. The rollout of his health care website bombed, and high-visibility parts of his agenda have yet to make it through Congress, including a call for gun safety legislation in the wake of the shooting at a Newtown, Conn., elementary school a year ago and a sweeping overhaul of immigration laws. 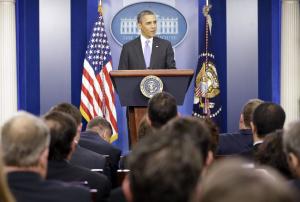 “If you’re measuring this by polls, my polls have gone up and down a lot over the course of my career,” he said, and then repeated that the economy was finally showing significant progress.

The president fielded questions a few hours after the government announced the economy grew at a solid 4.1 percent annual rate from July through September, the fastest pace since late 2011 and significantly higher than previously believed.

Much of the upward revision came from stronger consumer spending at a time when unemployment is at a five-year low of 7 percent. Obama did not mention it, but the stock market is also at or near record levels.

In his review of the year, Obama also noted that U.S. combat troops will finally be withdrawn from Afghanistan during the coming year.

As he has before, he promised to speak in more comprehensive terms in the near future about the future of NSA surveillance programs.

“I have confidence that the NSA is not engaged in domestic surveillance or snooping around,” he said. Yet he added, “we may have to refine this further to give people more confidence.”

A presidential advisory panel this week recommended sweeping changes to government surveillance, including limiting the bulk collection of Americans’ phone records by stripping the NSA of its ability to store the data in its own facilities.

Separately, a federal judge ruled earlier in the week that some of the NSA’s activities were likely unconstitutional. Judge Richard Leon called the NSA’s operation “Orwellian” in scope and said there was little evidence that its vast trove of data from American users had prevented a terrorist attack.

Obama was challenged on his 6-month-old statement that he and his administration had gotten the balance about right, in terms of the NSA’s activities, between concern for terrorism and protection of civil liberties.

He replied that the same assessments are made on a daily basis and noted pointedly that if an attack were to occur, “the question that’s coming from you is, ‘Mr. President, why did you slip?'”

On a key foreign policy concern, Obama said it would be wrong to impose new sanctions on Iran at a time the United States and other nations are testing an interim accord designed to rein in Tehran’s nuclear program. If necessary, “we can pass new sanctions in a day,” he said, referring to lawmakers.

As for health care, Obama said that despite the problems, including the rollout of the website, “more than 2 million people have signed up or more” since enrollment began.

“What that means is … the demand is there and the product is good,” he said.

He turned aside a suggestion that the administration has made so many exemptions that it should have simply delayed the requirement for individuals to purchase coverage or face a penalty. Several lawmakers have called on him to do that, even some Democrats who voted for the legislation.

Obama faced the type of challenging questions that presidents have long encountered, and he drew laughter with his answer to one of them.

“My New Year’s resolution is to be nicer to the White House press corps,” he said.