” Navy: Man who died on famous ship an ex-SEAL”

NORFOLK, Va. (AP) — One of two American security officers found dead off the coast of Africa on the ship from the movie “Captain Phillips” was a former Navy SEAL, according to a service record released to The Associated Press on Thursday.

Mark Daniel Kennedy, 43, of Baton Rouge, La., enlisted in 1995 and completed his final tour of duty in 2008, according to his record, sent in an email by Navy spokeswoman Lt. Lauryn Dempsey. The SEALs are an elite unit of the military’s special operations forces. Kennedy served as a special operator first class, his record says.

Police say Kennedy and Jeffrey Reynolds, 44, were found dead Tuesday in a cabin on the Norfolk-based Maersk Alabama — a ship that grabbed headlines in a 2009 hijacking by Somali pirates, an incident dramatized in the movie “Captain Phillips” starring Tom Hanks.

The ship was berthed in Port Victoria in the Indian Ocean island nation of Seychelles. Police there have given no cause of the deaths. They say the men worked for Virginia-based Trident Security, which was founded by former SEALs and employs former special warfare operators to provide security. Requests to Trident for information about the men have not been answered.

Police in Africa and the U.S. Coast Guard have said they are investigating the deaths. 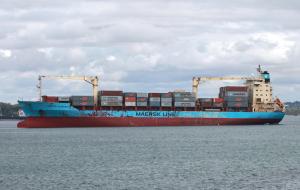 The Maersk Alabama’s parent company Maersk Line, Ltd., also is based in Norfolk. The Maersk Line said Wednesday that the cause of death is under investigation but is “not related to vessel operations or their duties as security personnel.”

The Alabama transports food aid to East Africa in support of the U.S. government’s “Food for Peace” program, according to the company. Crew members also help support the Bee Hive Children’s Home in Mombasa, Kenya.

Several crew members who were aboard the ship when it was hijacked in 2009 are suing Maersk Line Ltd. and Mobile, Ala.-based Waterman Steamship Corp. over the attack. The hijacking captured world headlines in 2009 and again when “Captain Phillips” was released last year. The five-day hijacking standoff ended when Navy SEALs aboard the USS Bainbridge shot and killed three of the pirates who were holding Capt. Richard Phillips in a lifeboat.

Nine crew members in the lawsuit filed in Alabama in 2012 say they suffered physical and emotional injuries after Somali pirates boarded. Some crew members were held at gunpoint with Phillips, and others hid in an engine room.