Coronavirus: Why has the virus hit African Americans so hard?

Coronavirus: Why has the virus hit African Americans so hard? 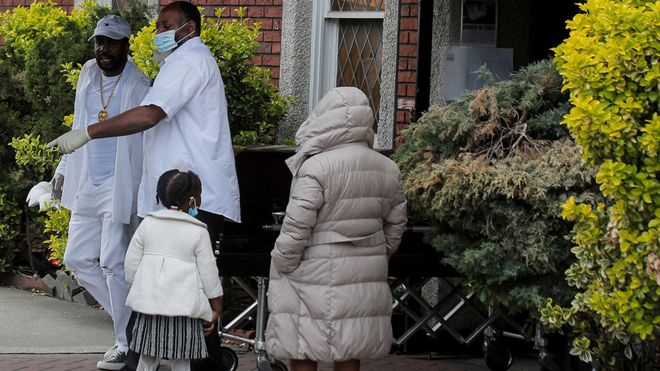 To a lot of Americans, the racial disparities shown in the number of people dying of coronavirus-related causes have sadly been unsurprising.

The cities of Chicago, New Orleans, Las Vegas and states of Maryland and South Carolina are among those now starting to report data based on race, and show an over-representation of victims who are black.

While some of this could be due to the long-standing inequality issues in the US that we have become familiar with, other reasons are perhaps more unexpected and could potentially have been dealt with.

Here are the experiences of three people affected by the crisis in different ways – their stories explore why black Americans appear to be more at risk.

“My sister Rhoda was the matriarch of our family. She was the first in our family to go to college, got a degree and became a public school teacher,” says Reverend Marshall Hatch of Chicago.

“She was just a very warm and friendly person. Very, very genuine. Pure in her personality and very generous.”

Reverend Hatch had been extremely close to his elder sister who had often played the organ in his church. But 73-year-old Rhoda Hatch passed away on 4 April after spending eight days on a ventilator.  Two days earlier Reverend Hatch’s best friend, Larry Harris, also died. He was 62. Both had contracted Covid-19.

In fact, four people close to him have now died from it and he talks of it utterly ravaging the mainly African American neighborhood of West Garfield Park in which he lives. “We have been trying to find a grave for my sister for a Saturday burial, but it has been harder than ever,” says the Reverend. “But it’s almost like we could have predicted that when a plague like this came along, that it would disproportionately affect people who are already under siege of economic violence.”

According to census data, West Garfield Park already had a life expectancy a full 16 years lower than a predominantly white neighborhood of Chicago just three miles away.