OMAHA, Neb. (AP) — At least 10 people have been hospitalized and others could be trapped after an explosion and partial building collapse Monday at an Omaha animal feed processing plant.

Interim Omaha Fire Chief Bernie Kanger said he’s not sure how many workers could be trapped in the wreckage of the International Nutrition plant. The fire that followed the explosion around 10 a.m. has been extinguished, but firefighters gingerly searched the structure, fearing that more debris could rain down.

“It’s very extreme conditions” inside the plant now, Kanger said. “There is significant structural damage inside.”

Kanger declined to comment on possible fatalities. At the time of the blast 38 employees were at work. One firefighter was among those injured, Kanger said.

Omaha-based International Nutrition declined to comment to The Associated Press.

Workers’ family members who gathered outside the plant said they’d received cellphone calls from loved ones inside who told them one or two people may be missing or trapped. 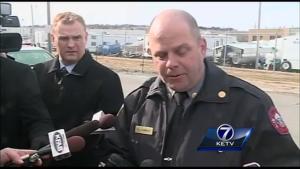 Kanger said he requested aid from urban search and rescue experts based in Lincoln, so the search could take several more hours.

Plant worker Nate Lewis said he felt fortunate to have made it out. Lewis, 21, said he was on the first floor when he heard the blast. The building went dark, so he used light from his cellphone to make his way across the production floor to safety outside.

“I was a production line worker, although I don’t know if I want to be that anymore,” said Lewis, who’s worked at International Nutrition for about four months.

There appears to be structural damage to the top of the building, which sits in an industrial area visible from Interstate 80, which bisects Nebraska’s largest city. There are no residences nearby and no other buildings were evacuated after the explosion.

Diane Stout said she’d heard from her husband, a manager on the plant maintenance crew, so she knows he’s OK, but she and her two daughters were still anxiously waiting to see him because he has heart problems.

The workers all know each other well, Stout said, so she was hoping to hear good news about friends there.

Sarah White said she was at home with her four children when she got a call from her husband right after the explosion.

“I could hear the panic in his voice,” she said. “But he said he was OK.” She said he’d been watching trucks unload from outside the building when the blast occurred.

“That’s where he works every day. That could have been him,” White said, referring to the injured workers.

Her husband, Jamar White, said he was lucky.

Jamar White said he heard a loud crack and then looked up to see the back wall of the building collapsing.

“I ran at least 150 feet,” White said. “I ran far enough to make sure nothing else would keep falling.”

Afterward, White said, he could see inside the third floor of the building where at least two co-workers were screaming for help.