The Life of Artensa Randolph

Reprint from We The People Media Residents’ Journal

Public housing legend Mrs. Artensa Randolph passed away on Aug. 19, 1997. I have compiled a list of tributes and interviews to her. Let’s start with a passage from her memorial book:

Mrs. Artensa Randolph was born in Pine Bluff, Arkansas on October 1, 1915. Mrs. Randolph was a product of the old, southern Black work force, beginning her early employment picking cotton on the plantations in Pine Bluff. She moved to Chicago in 1937, in search of an improved quality of life and initially found employment in the stockyards. Eventually, she achieved her career goal as a community Representative for the Chicago Board of Education, a position from which she retired after 20 years of service. This position afforded her many opportunities to know the people and the communities of Chicago.

In 1962, Mrs. Randolph moved into the Chicago Housing authority’s (CHA) Washington Park Homes where she lived for the past 35 years. Upon her arrival she quickly became involved in the tenant’s rights movement, which, much like the civil rights movement of earlier years, was organized primarily to address the inequities faced by residents of public housing. Mrs. Randolph was at the vanguard, uniting residents to address the sharp decline in public housing upkeep and maintenance and pushing for affordable and decent housing; a movement which continues today. Mrs. Randolph determination helped change the face of Chicago public housing. Through her efforts, modernization funds for CHA were suspended until appropriate recognition was given to the resident organizations and until a Memorandum of Accord, outlining the residents’ partnership with CHA was signed. 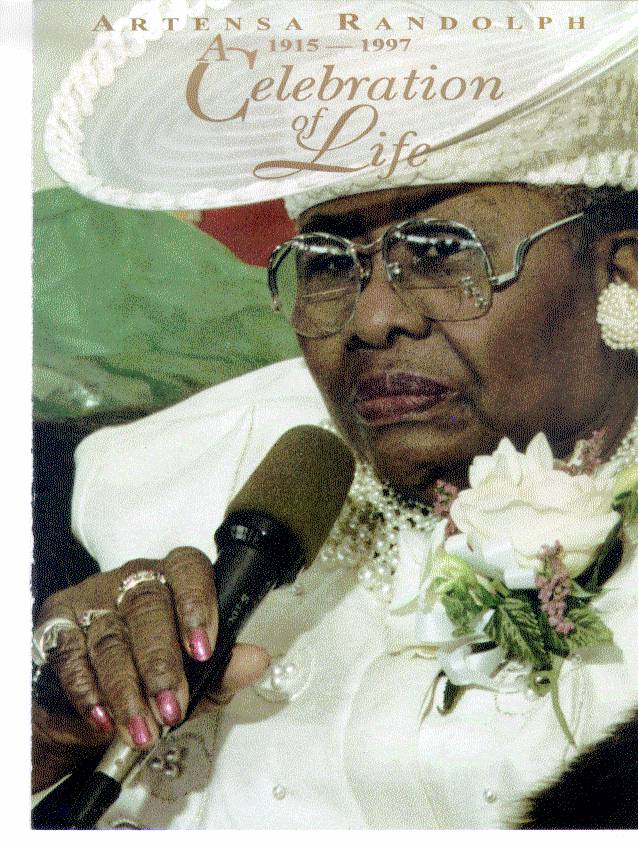 Mrs. Randolph was devoted to her family. She was a mother who truly loved her family. There are many who can tell stories of Mrs. Randolph’s love for her family and friends. In fact, she had so many godchildren many did not know exactly who were all the biological offspring. Every child in the development was a member of her extended family.

I interviewed Anthony Todd, a longtime friend to Mrs. Randolph:

“We wrote a book that we are trying to get published shortly with some additional things to be added. Mrs. Randolph was indeed a teacher and what she was trying to teach was that we as a group can accomplish more than any one individual.

“I know that Mrs. Randolph was not a saint because there are no saints on this earth. I thought of Mrs. Randolph as a wonderful person, yes with some power but she did not abuse it. Mrs. Randolph insisted that everything go before the board and she did understand that power can corrupt.

“When HUD arrived here in Chicago, they approached her and told her that they wanted her to be responsible for her own budget and separate it from the Chicago Housing Authority’s operating budget. Most people would have been flattered by this, maybe even power struck, and would have abused this authority. But after years of experience with the Chicago Housing Authority’s budgetary process, Mrs. Randolph requested technical assistance from Washington, D.C., Housing and received funding to oversee this budget and provide the technical assistance Mrs. Randolph was requesting.

“What struck me about this perception was that you hear and read things. I read about the president and a director going to prison as a result of misappropriation of funds. You hear about people throughout the housing authorities nationwide discharged and prosecuted for misappropriation of funds. You never heard Mrs. Randolph’s name connected with this. She mentioned years ago that as a result of her listening to other people, she had budgetary problems because she was not knowledgeable of budgetary financial matters at that time. We all learn from trial and error. Here’s a woman who has associated with the presidents and was at the Mayor(s) of Chicago’s beck and call, but always had time for the residents of the Chicago Housing Authority.

“Mrs. Randolph would say, ‘I’m never going to forget where I came from, not because I’m in a wheelchair but because I have seen people pass (die) and have seen people fall on hard times.’ And when asked, she would always lend a helping hand. This she learned from an early age.

“In a book that was by a friend, it had a recipe in it from Mrs. Randolph of cornbread and buttermilk. This is what we ate when we were coming up and I don’t care what anyone says, it was good then and still good today. She was not ashamed of her roots. This is why she was a teacher. To read the poem “A Lesson from the Geese.”

“When we were in the caravan to lay Mrs. Randolph’s body to rest, Georgia Ann started yelling, ‘Look up, look up.’ And over the car was a v-shape of geese flying. Of course during this time we perceived thisas a sign that Artensa was letting us know that she was all right and a job well done.

“Mrs. Randolph attended her last retreat in May 1997. I’m so very glad that she enjoyed this retreat. She said, ‘This was the best retreat.’ Mrs. Randolph truly enjoyed working with the seniors and disabled residents. Recently, when everyone went away, as a result of the changes, the mayor seemed to have looked the other way. Coming from where she came from, she had accomplished a lot. I don’t think that there are many people who can do this. There are many people who would have turned to drugs and alcohol or fallen from the wayside and said, ‘I can’t do it because the society won’t let me do it.’ Mrs. Randolph never said anything. She just kept going. She would beat you up on sometimes but she would tell you what she felt. Mrs. Randolph would not do anything against the policies and procedures. ‘You must do it the right way,’ Mrs. Randolph said. ‘I’m not going to tell you anything wrong. Did you take it by way of the Local Advisory Council. That’s what you have to do.’

“When working with the late Mayor Harold Washington, she never had to tell me anything else. I learned what the policies and procedures were. There was a dedication in naming the clinic. It is the Artensa Randolph Health Care Clinic located at 3216 S. Wentworth Ave. The reason for naming this after Mrs. Randolph is that she is a Black icon and can wear out a wheelchair in less than a year’s time because the wheelchair could not keep up with her. She was very active.

To share her last words, “I’m tired and I’m sick and I’m tired of being sick, I’m cold.”

“Mrs. Randolph leaves a legacy behind. Now we must carry on this legacy hoping that the Central Advisory Council continues her legacy of always willing to help others.” 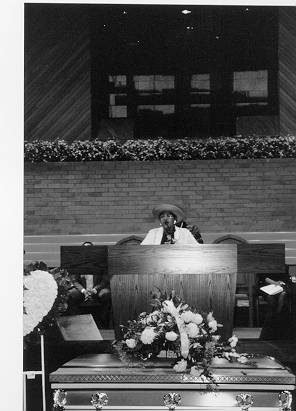 “Mrs. Randolph was a unique person. She will always remain in our mind as the founding chairperson of the Central Advisory Council. No one will every be able to take Mrs. Artensa Randolph’s place and I appeal to the residents to keep her dreams a reality.”

This entry was posted on Sunday, October 19th, 1997 at 7:51 pm. You can follow any responses to this entry through the RSS 2.0 feed. You can leave a response, or trackback from your own site.