How to Stop Falling for Mr./Mrs. Maybe

How to stop falling for Mr./Ms. Maybe 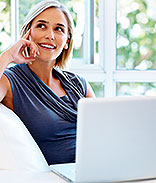 “But we’d be so good together if he’d just realize that I’m the perfect woman for him!”

“I know she and I would make a great couple…I just have to convince her, then she’ll see it.”

Here’s the thing: Being willing to explore romantic possibilities is important. It gives us the gumption to keep trying, and sometimes, all it takes is one chance meeting or a shift in circumstances for your entire life to change overnight. And really, there’s absolutely nothing wrong with fantasizing about the romantic possibilities your future might hold…unless it prevents you from accepting reality.

All too often, daters end up getting stuck on a person they’ve met, heard stories about or noticed online because they think, “Wow, this person has awesome potential.” But here’s the problem: someone’s potential does not a relationship make. Potential is just that… potential! Until both parties say, “OK, we’re officially dating each other,” you can have all the potential in the world — but a relationship isn’t necessarily going to happen.

Related: Is she the wrong woman for you?

So how can you keep yourself from falling in love with a person’s potential at the risk of overlooking a real love that might fully bloom with someone else? Here are five tips for you:

Why do you think there’s relationship potential here?
“The ability to note a date’s ‘potential’ may be one of the main reasons intelligent, empathic people remain stuck in dead-end relationships,” says Dr. Karin Anderson, author of It Just Hasn’t Happened Yet. “They see the potential (which may certainly exist) in a prospective partner and begin attributing additional qualities which may or may not exist to a suitor who has yet to earn them.” In other words, unlike pragmatic singles who — despite finding someone charming and attractive — will dismiss a date who fails to meet their criteria, the sensitive dater sees the good in everyone and imagines that with just a smidgen of encouragement (i.e., “The love and support I’ll give to this person”), those deal-breaker qualities will melt away. Is there really potential for this to turn into a full-fledged relationship, or are you blinded by hope? According to a recent Match.com poll of over 12,000 men and women, it seems more of us are willing to overlook red flags in fledgling relationships than we’d probably care to admit: When asked, “How many dating mistakes (fibbing, being late, taking calls at the table, etc.) can someone make before you cut him/her loose?”, 53% of respondents said “It depends how long we’ve been dating,” 24% said only 1-2 mistakes were acceptable, and the final 23% chose to follow the “three strikes and you’re out” rule. And that 53% majority admits to being focused on building up that preconceived “relationship potential” over time and eventually turning Mr./Ms. Maybe into Mr./Ms. Right.

Dr. Anderson suggests asking yourself the following questions as a good “potential” litmus test: “We know each other reasonably well, so why hasn’t the relationship taken off? Where’s the resistance coming from? Why am I so interested in someone who is clearly noncommittal about being with me?”

Which traits make you believe that this person could be The One?
It’s great to identify the qualities you find appealing in a romantic partner. However, it’s a mistake to think that there is only one individual who possesses those characteristics. “Don’t give this person so much power!” warns Dr. Anderson. “If you’re obsessed with the potential you believe you may have with a particular person or someone’s profile you read online, you have to ask yourself, ‘What’s so great about this one’s potential?’ And how does Suitor A’s potential beat out Suitor B’s real and intentional efforts to be with me?”

Dr. Anderson suggests reminding yourself that there are other people in the world who may also be great matches for you, even if your “potential” person has all the qualities you think you’re seeking in a partner. Try saying to yourself: “I know it feels like Mr./Ms. Potential is the perfect person for me, but since he/she isn’t willing to enter into a real relationship with me, then he/she can’t possibly be the perfect person for me. The perfect person for me will be super-excited to jump into a relationship — I won’t have to drag him/her kicking and screaming, or figure out the right way to convince this person that we could be wonderful together.”

Related: Tips to get the love you want instead of settling

Realize that no matter how hard you try, a “potential” romance isn’t the same thing as being in a real, reciprocal relationship
“The key element here is that potential is never real,” says Dr. Anderson. “It’s like trying. When people say, ‘I tried to make it,’ did they make it? Obviously not! It’s great they tried, but they didn’t make it — so whatever was supposed to happen, didn’t happen… end of story. It’s the same thing with potential. When people say, ‘We had the potential for a great thing,’ did they have a great thing? Obviously not.” In other words, you may do everything perfectly, you may actually be a fantastic match, there could be potential for an amazing relationship between you and this person… but if it stays in the “potential” realm, it’s not reality. And it’s not a relationship — or it’s not an equitable one, at least.

That said, it’s hard to let go of a “pseudo-relationship” because it does fill up some of your time and emotional energy… and typically, there will be some fulfilling moments. But eventually, it becomes exhausting to be the only one in the relationship believing that your romance could possibly have legs. On that note, Dr. Anderson suggests that if you find yourself thinking, “If only he/she would take the leap and give us a chance,” stop and ask yourself: “Why do I find it acceptable to shoulder this relationship solo?” Remember that a relationship is supposed to be a partnership, not something that requires you to make things work single-handedly… otherwise it’s not fair to you, and it isn’t fun, either.

Are you fixated on someone’s potential because you’re too afraid to face your own fears?
Sometimes a potential relationship with one person manages to distract from the possibility of a real relationship with someone else. Are you afraid of getting your heart broken again? If so, it could explain why you’d rather limp along with exploring the possibility of a great love with someone who’s unattainable rather than taking the risk of embarking upon a real relationship.

Related: How to stop dating the wrong person

“To the extent that we indulge in fantasizing about the potential we have with a particular person, we’re pulling ourselves off the market — we’re unavailable to others who may also have tons of potential they’re ready to put to use in a real relationship with us,” says Dr. Anderson. “Again, why would we willingly stagnate in the Purgatory of Potential? Who knows! Maybe we’re scared to get hurt again, so it’s easier to channel our relationship energy in a dead-end direction. Maybe we fear intimacy; maybe we’re emotionally unavailable… it’s hard to define the reason why, but the ‘what’ remains,” she explains, adding: “Obsessing on potential gets you nowhere.” And another Match.com poll of over 32,000 men and women reveals that some of us require an over-abundance of hints that a partner isn’t The One before we’re willing to break things off for good. When asked what dating infraction was most likely to lead to a permanent breakup, 67% chose lying as the biggest relationship deal-breaker, while 19% mentioned bad manners (being consistently late, dressing poorly, taking phone calls on dates, etc.). Perhaps most worrying of all, only 13% said refusing to become exclusive was a dating deal-breaker — and shockingly, 2% of respondents felt that none of the above issues were actually worth breaking up over. It seems more people are willing to settle for less-than-satisfying pseudo-relationships, but knowing you deserve (and can achieve) better is the first step in resisting the urge to settle out of loneliness or convenience.

So the next time you find yourself thinking, “What’s his/her problem? Can’t this person see what we could have together?” replace it with something more realistic: “What’s my problem? Can’t I see what we don’t have — which is a committed relationship? Why am I obsessed with someone who’s incapable of giving me what I want?” Dr. Anderson suggests reminding yourself that this person isn’t just unwilling to give you the relationship you want, he or she is incapable of giving you the relationship you want — and that any potential you see with this person is pure fantasy.

Make a decision to move on — even if it’s painful
Once you’ve accepted reality, it’s time to move on, move on… move on! “If the potential exists, he/she will step into it eventually and come running for you, but you cannot be a part of this person reaching his/her potential,” says Dr. Anderson. Why? Because if you set up a dynamic of “I’m in a relationship with a ‘fixer-upper,’” then that relationship — by its very definition — has to end once those positive changes have occurred.

If it feels too painful to say you’re letting go of this person forever, tell yourself that it’s just for right now. However, this will probably become permanent once you meet someone who’s willing to step up and be with you in the way you really desire. The next time you find yourself sadly daydreaming about “what could have been,” honor who you are and what you have to give another person by saying: “I am nobody’s victim, and I refuse to give over my heart to someone who won’t — or can’t — cherish it. When I find myself wistfully thinking of ‘what-ifs,’ I’ll remind myself that love feels so much better when it’s freely given — rather than when I have wrestle it out of someone!”

Kimberly Dawn Neumann (www.KDNeumann.com) is a popular New York City-based freelance writer whose work has appeared in such publications as Cosmopolitan, Marie Claire, Maxim, Redbook and frequently online. A certified dating/relationship coach, she’s published The Real Reasons Men Commit and is the founder of www.DatingDivaDaily.com. She has definitely fallen headfirst into the “potential” love trap more than once

d myself that love feels so much better when it’s freely given — rather than when I have wrestle it out of someone!”

Kimberly Dawn Neumann (www.KDNeumann.com) is a popular New York City-based freelance writer whose work has appeared in such publications as Cosmopolitan, Marie Claire, Maxim, Redbook and frequently online. A certified dating/relationship coach, she’s published The Real Reasons Men Commit and is the founder of www.DatingDivaDaily.com. She has definitely fallen headfirst into the “potential” love trap more than once